Shoguns, Shrines, and Shinkansen in the heart of Japan

On Monday, September 8th (which already feels like a lifetime ago, but more on that in the next post...), we arrived in Nara, a smallish city that is part of the great urban sprawl known as the Kansai. This large mass of human habitation combines Osaka, Kyoto, Kobe and others into Japan’s second-largest megalopolis. Like Tokyo and Yokohama, Osaka and Kobe are pretty much one big endless city; Kyoto and Nara are both about a half-hour’s train ride through rolling hills. Nara was our choice for a home base from which to explore the region. 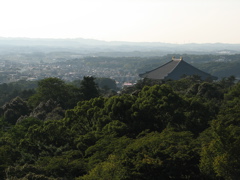 The city of Nara from the surrounding hills

In the 7th century, Nara became Japan’s first capital city, and during this period the world’s largest wooden structure, the Todai-Ji temple, was built. 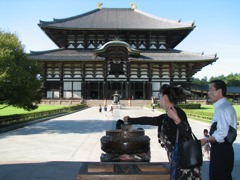 The entry to the Todai-ji: burn some incense for good luck

What you fail to comprehend is that this temple is big. I mean, really big. Words and especially little pictures on a blog in no way communicate the immense hugeness of the Todai-ji. You don’t even realize how big it is from a distance. You see the thing from a fair way off as you’re walking up to it, and you think you’re not that far away; then the walk is a lot longer than you thought and the temple just keeps looming bigger and bigger. When we finally stood at the bottom of the front steps, we both looked at each other and said, “This thing is really... big.” 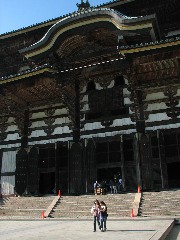 For perspective, note the size of the people in the doorway

Oh, and for the record, the current building was built in the 16th century after the first one burned down... and it’s only two-thirds the size of the original.

Inside the Todai-ji is a very large (of course) bronze Buddha. It is also quite amazingly huge. And again, you don’t really realize how big it is when you’re first looking at it, until you notice a guy standing in front of it for perspective. 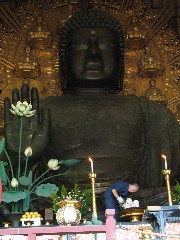 ”I’m the Buddha, and I am way bigger (and more enlightened) than you will ever be.”

We stayed in Nara with a very pleasant couple, Mayumi Anzai and Rob (never got his last name). Mayumi runs a restaurant called the Cafe Youan in the old part of the city. 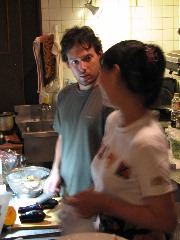 Mayumi and Rob, hard at work in the cafe kitchen

She lives in the rooms upstairs and starting hosting couchsurfers. Rob came to visit, wound up staying for a while, and they became an item and he’s been there since (apparently, they are not the first host/guest couple who have met through Couch Surfing...). Mayumi is quite the whiz in the kitchen, and whipped up a fantastic batch of veggie tempura for us while we were there. 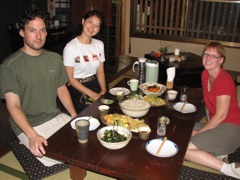 Oh, and that salad in the foreground? Seaweed -- the Japanese love it... imagine wet spinach

The next day, we took the train an hour or so west to Japan’s most perfectly-preserved medieval castle, the Himeji-jo. 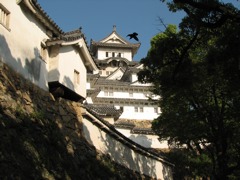 Through most of the Middle Ages, Japan was a collection of feuding city-states. Each local warlord built his own castle like this, with a massive central tower. When the extremely ruthless shogun Ieyasu Tokugawa consolidated control in Tokyo in the 16th century, most castles were destroyed, but Himeji-jo fortunately was spared. 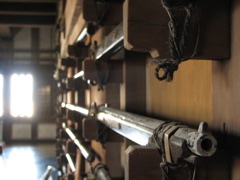 Muskets inside the castle

Now, I have always found this phase of Japanese history fascinating -- bushido, the samurai code of honor, the Jesuit missionaries and persecution of Christians under the Tokugawas, etc. I think it started when I played Ko-Ko, the inept Lord High Executioner in Gilbert & Sullivan’s brilliant comic operetta The Mikado, in eighth grade. Pardon me for a brief lyric interlude from its opening chorus...

If you want to know who we are, we are gentlemen of Japan
On many a vase and jar, on many a screen and fan
We figure in lively paint, our attitudes queer and quaint
You’re wrong if you think it ain’t...

I venture off into this cultural tangent only because this traditional view of the Japanese culture it portrays... 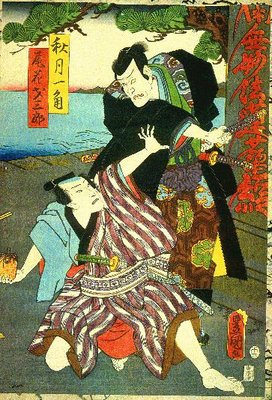 ...is so far from the reality of today. As was illustrated to us that evening when we stopped in Osaka on our way back to have dinner in Dotombori, the riverside entertainment district. 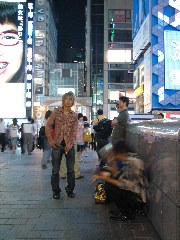 Today’s “gentlemen of Japan” posing amid the Dotombori neon

Osaka is Japan’s Chicago -- a hard-working, broad-shouldered merchant city that really knows how to cut loose and have a good time. They even have a unique slang word, kuiadore, that means to eat and drink until you collapse (thank you, Anthony Bourdain, for inspiring us to stop and experience it). And they have a specialty that I was dying to try: okonomiyaki, an omelette-like pancake of egg, cabbage, and meat smothered in mayonnaise and barbeque sauce that you cook yourself on a griddle-table. Sounds kind of nasty, but darn tasty: good, solid, hard-working-and-partying “Take your fancy sashimi and shove it” food. 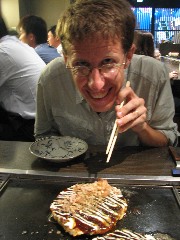 Eggs and chopsticks: a difficult combination to master

We spent two days exploring Kyoto, which is kind of like going to Italy and spending only two days in Florence -- there’s so much to see there, you can barely scratch the surface in a week, let alone a couple of days. At first glance, Kyoto is not a particularly attractive city; the visitor expecting to step off the train into a woodblock print of old Japan is facing disappointment. For starters, the train station itself is a modern architectural wonderland... 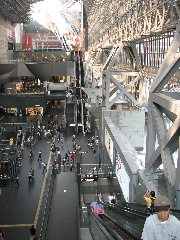 Kyoto station: keep taking the escalators up and don't look down 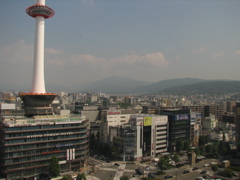 Downtown Kyoto from the 15th floor of the station -- which, yes, has 15 floors

Like an oyster, Kyoto’s exterior is tough, gray, and ugly, and you have to work hard to pry it open.

Well, I can’t extend it to come up with something in Kyoto to compare to the nasty filter-feeding creature inside... but the point is that deep inside if you look hard enough, you find beautiful pearls. Peaceful shrines, tree-lined canals, geisha hurrying to appointments in the alleys of the Gion entertainment district: this is the real Kyoto, and it’s waiting for the patient seeker to find it. I’ll let the pictures do the rest of the talking... 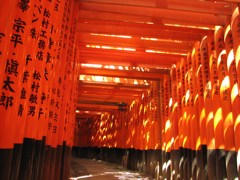 Torii in the Fushimi-Inari shrine, made famous in the movie Memoirs of a Geisha 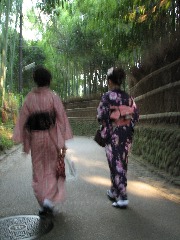 Wearing kimonos for a walk in the bamboo forest 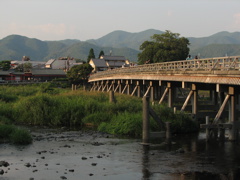 Wooden bridge in the Arashiyama district in the waning sunlight 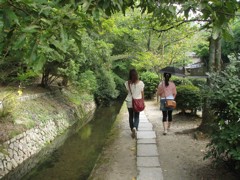 Strolling along the Philosopher’s Walk 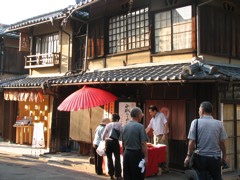 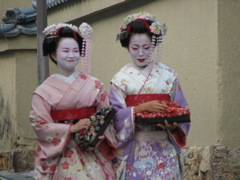 Two maiko, apprentice geisha, out in their finery at dusk

It seems appropriate that Kyoto is the very soul of Japan, because it has a talent for working its way into your soul and making you sorry to leave it.

And so, with our time in Japan ending and the necessity of our return to the United States looming, we headed back to Tokyo aboard the shinkansen, or bullet train -- one of Japan’s most iconic engineering marvels. Head to the station and find your platform... 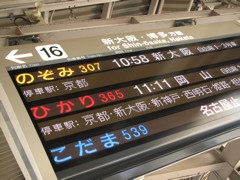 Smile in wonder as the sleek white machine glides to halt almost silently... 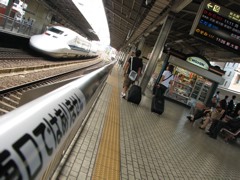 And settle in as you are whisked past the Japanese countryside at over 250 miles per hour. 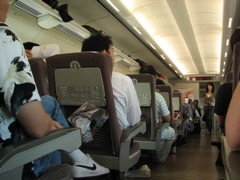 A very pleasant way to begin a not-so-pleasant detour.

Previous Next Table of contents

I thought Geisha were a thing of the past. Train ride sounds awesome. Vegetation looks beautiful and relaxing. Isn't that Ugly Betty I see behind the "gentlemen from Japan?"
I knew a girl named Mayumi when I attended UW-Eau Claire. She was always trying to pronounce the "wh" as in "what" or "where" in the formal way we learned in school (so it sounds like you're blowing with your mouth in a little "o"). But for her, it always came out as "fwat." As in "Uh...A-mee? Uh...fwat is the ho-meh-ork?"
-Amy

This blog requires you to be a logged in member of Travellerspoint to place comments.

If you aren't a member of Travellerspoint yet, you can join for free.